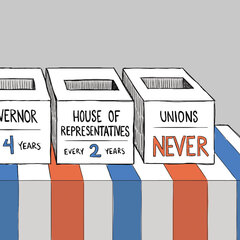 Most public employees have not had an opportunity to vote on the union at their workplace. This is because once a union is certified, it normally maintains that certification indefinitely. When new employees start on the job, they are simply given a union card and told which union is representing them — they often have no voice in the matter.

Only about seven percent of private sector union members have ever had a say in which union represents them and the percentage for many public employee unions is even lower.

Union members deserve worker voting rights to periodically vote on what union represents them in the workplace.

Even with the Janus decision and right-to-work, unions have a monopoly on representation and therefore assume to speak for every employee, regardless of membership status in the union. This means workers who opt out of union membership are still forced to accept representation from a union they likely did not elect. Unionized employees should have the power to pick which union is representing them. Allowing public employees to hold regular union certification elections grants them a choice and a voice in deciding who is best suited to represent their interests.

Since most government unions were founded in the 1960s and ‘70s, few, if any, of the public employees who voted for those unions are still on the job. Just one percent of teachers in the 10 largest school districts in Michigan were employed when their workplace was organized. For example, in the Ann Arbor, Detroit and Grand Rapids school districts, there are likely no current teachers who voted for the unions that operate there, since these unions were founded in the1960s. Further, if the age distribution of teachers in these districts mirrors that of the state as a whole, nearly 75 percent of the teachers working in these districts would not even have been born when the union in their workplace was certified. This case mirrors many school districts across the country.

Some unions will sacrifice their members’ compensation to facilitate organizing drives. Rian Wathen, the former Director of Collective Bargaining for United Food and Commercial Workers Local 700 in Indianapolis, described a situation he once witnessed. His union had organized several stores in a local grocery chain. During contract negotiations the union accepted substantial cuts in their existing members’ health benefits. In exchange, the employer agreed not to resist their organizing efforts at his non-union stores. The contract meant hundreds of thousands more dollars for the union, but hurt the existing members.

Allowing public employees to vote on the union that represents them will make these unions more responsive to their members. For example, in Iowa, state legislators enacted a union recertification policy for public sector employees. Now, many public sector employees in the Hawkeye State get to regularly vote for their union representation. According to the Show-Me Institute in Missouri, the cost of recertification process averages just $1.50 per voter and could be even less. The cost is paid by the union via filing fees; it costs taxpayers nothing and workers’ are able to have a say in who speaks for them.